expose your business to greater audiance

We offer website and application development to deliver world-class internet solutions bundled with up-to-date internet technologies to offer a technology that is secure, robust and efficient.

We operate from Shillong while we are serving the nation and beyond with our website and application development service.


Nothing. However, you must have a clear idea about the website or web application you are willing to develop and we will help with everything else.
We have a range of technologies in web development, be it - PHP/ASP/JSP/JavaScript with up-to-date framework and supporting technologies.
Yes. We make sure that our codes are search engine optimization for the good of client's business.
We set milestone for the project deliverables and keep you updated with email/call/skype/meeting. Also, we will setup a demo environment for you to view progress on a regular basis.
That depends entirely on your website or web application requirement (feature and functionalities) and your project budget.
However, with us, it will be budget friendly and we assure you of that.
Yes, we do for with a ligitimate market fee.
Not our speciality, but we do offer simple design works and for complex designs, we outsource it.
No. But, if need help, we can outsource it for you.
Lifetime, if any problem occurs in a defined scope, and for everything else, you can opt to our Annual Maintainance Cost.
Yes. We have served clients from around the world and we did it efficiently.
You. Upon completion of the project, we will hand over the website or application's code, documentation and credentials, along with the software rights to you.
Never happened. However, we authorize you to set a clause for that in our agreement.
Write us at contact@codigion.com or fill the form in contact us page, and we will reach you back to get connected. 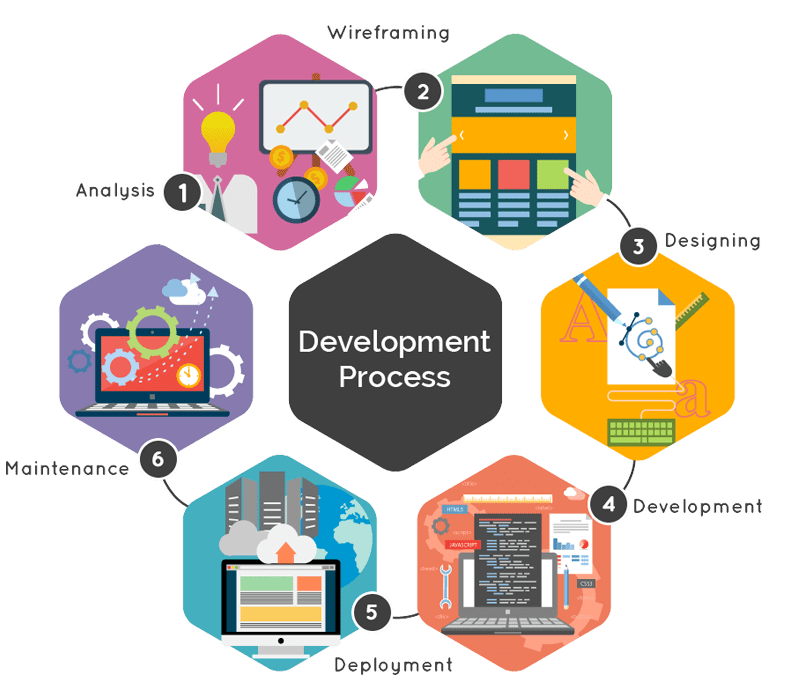 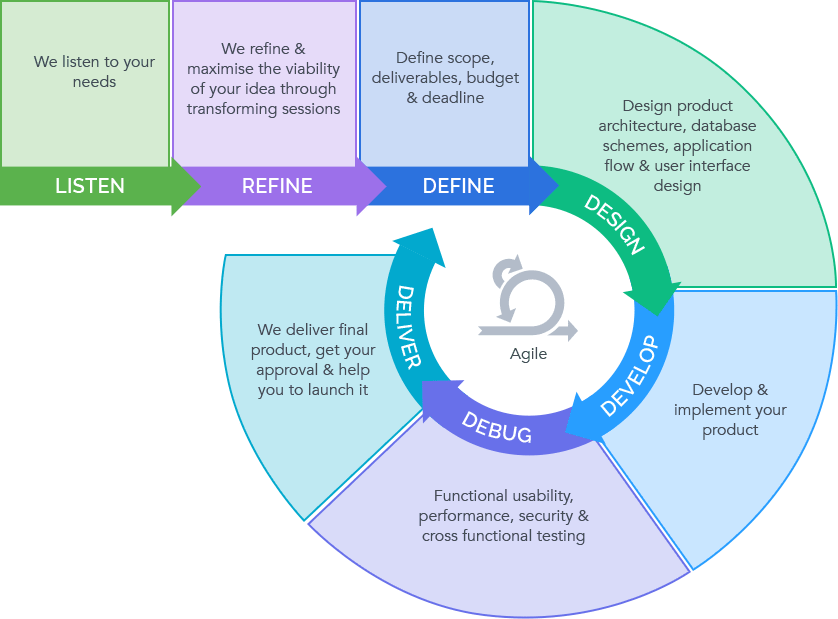 Usually, website or web applications are run in a client-server configuration. The machine that provides information services is called a web server and the machine that acquire the information from the web server is called client. For example, when you access facebook.com, the newsfeed you see resides in the machine called Server owned (directly or via third parties) by Facebook Inc. and you are called a Client. A server is a powerful and ever standby machine that is capable of serving millions of requests. As a client, you initiate the communication with the server.

The data sent by the web server to the client is usually displayed to the user via a special kind of software called Web browser. Google Chrome, Internet Explorer and Mozilla Firefox are the most commonly used web browsers.

Website Development is referred to the process of creating and building a website to be hosted on Web (Internet) or to a private network (Intranet), ranging from writing a simple static website with plain text or a complex dynamic web application.

Website or Web Application Development involves standard software engineering process (Web Development Life Cycle: Agile, Scrum or others) making use of following technologies: JavaScript for client-side functionalities, HTML for client-side markup (content), CSS for client-side design, server-side scripting having range of tools to choose from, such as PHP, Java, ASP, Python, Ruby and other along with database such as, MySQL, NoSQL, MongoDB and others.

Website or Web Application can also be platform-specific or cross-platform based on the Operating System, for instance - an application written in ASP is specific to Windows (Microsoft IIS Server) while PHP application can be hosted on Windows (WAMP Server), Linux (LAMP Server) or Mac (MAMP Server).

Static Web Application is a web page with only content and design that are displayed as it is without functionality, designed using front-end technologies only.

Dynamic Web Application is a variable application that are processed and generated from the server using server-side scripting languages along with a database for loading data and content and front-end technologies.

e-Commerce Web Application is online stores or electronic commerce laid out for selling and buying products and services that incorporate many of the internet technologies such as electronic fund transfer, inventory management system, data collection and more.

Portal Web Application is a specific web app that is designed to serve information brought together from different sources uniformly.

Web Development has become extremely popular in recent years because of the internet boom with availability of diverse internet technologies (programming language, framework, and tools) daunting web developers. However, some of the popular web development technologies today are as under:

AngularJS which is an open-source JavaScript framework by Google popularly used for the single-page application that follows Model View Controller (MVC) architecture.

ReactJS is an open-source JavaScript library maintained by Facebook is popularly used for the writing User Interface (UI) for web application of larger application.

Ruby On Rails (RoR) is an open-source Ruby framework that runs on Linux that is popularly used for faster and joyful development experience.

ASP.NET is an open-source framework from Microsoft used for building a rich web application and web portals on Windows environment.

CSS stands for Cascading Style Sheets. CSS provides best utility with the markup languages like HTML, XHTML, SVG, XUL etc. For any webpage, there are two components - content and presentation of content. CSS enables separation between these two components. This allows displaying custom layouts of a webpage based on preferences without altering the content. With CSS, different users can experience the same website or web application in different fashions.

CSS comes with a syntax with English words, making it easily readable. Rules are the building blocks of CSS, where each rule-set is designated with a minimum of one selector and a declaration block. Selectors are the elements that make the code identify the areas where the markup style can be applied. Declaration blocks contain a list of declarations, where each of these declarations is itself a property of the web element.

The specifications of CSS are maintained and controlled by the World Wide Web Consortium (W3C). Before the advent of CSS, HTML or similar markup languages were used to present content on the website and web application.

Javascript is a high-level programming language with most of its syntaxes similar to that of Java language. This an interpreted language. Javascript is the most commonly used web application development language, where all the major web browsers come with Javascript bundled. As Javascript supports both functional and object-oriented programming, its use can be found in the software like desktop widgets and PDF documents, along with web applications. Following are the features of Javascript.

Python is an interpreted language just like Javascript. It is a multi-purpose language, and website and web application development is one of the purposes. The main goal in developing Python was to emphasize readability in code development, which means that a given task has to be achieved in the least possible lines of code. There is a numerous number of web applications developed using Python. Following are the features of Python.

PHP originally stood for Personal Home Page, which was originally developed for tracking the number of hits for a given web page. As the programming language evolved, the full form of PHP has been modified as a recursive acronym - PHP: Hypertext Preprocessor.

PHP is an open-source scripting language used within a server. In order to extract the complete potential of PHP, it should be embedded into a markup language just like HTML, CSS and JavaScript. On the other hand, PHP can also be used for template creation, website content management, and several other web frameworks. Just like other scripting languages, PHP is also an interpreted language. The PHP interpreter is either implemented in the form of a module or in the form of a Common Gateway Interface (CGI). But, unlike Javascript and CSS, PHP is mainly used to develop Back-end website and web technologies, as PHP is capable of developing dynamic web pages. The PHP interpreter is powered by Zend Engine, which is an interpreting engine for PHP. The PHP parser compiles the given code to produce bytecode.

Facebook, Wikipedia, Wordpress, and Joomla are the most common examples of website and web applications that are developed using PHP.

Ruby is another scripting language that is used to develop website and web applications. It is dynamic, interpreted and object-oriented in nature. Just like Javascript or PHP, Ruby is also a general-purpose programming language. Ruby was developed with the philosophy is to make programming productive and funny alongside complying with the principles of UI design. When compared to other languages for website and web development, Ruby allows faster app launch. Ruby helps achieve migration very easily.

Github, Slideshare, Goodreads, 500px, Pixlr, and Airbnb are some of the most common website and web application developed using Ruby.

Perl is also a scripting language with an unofficial acronym Practical Extraction and Reporting Language. Perl is a high-level general purpose language, which derives it features from the languages like C, Shell scripting, AWK, and SED. The major drawback of Perl is that it is so powerful that harnessing it didn’t happen up to the mark. Alongside website and web application development, Perl can also be used for system administration, bioinformatics, network programming, and other applications. Just like other scripting languages, Perl also has the following features.

If you need our service, let us guide you!